Essay on Beyond Black

Portfolio the catalogue of contemporary photography in Britain
issue 45: 2007 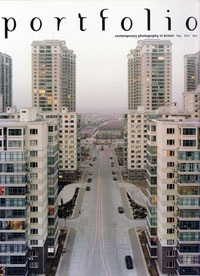 In Jane Brettle’s series Beyond Black, a veiled woman re-performs poses from an eclectic range of iconic photographs, ranging from Julia Margaret Cameron’s portrait of her niece Julia Jackson in 1865-6, to Helen Chadwick’s 1986 self-portrait Vanity. The titles – After Helen Chadwick and After Julia Margaret Cameron – simply indicate the photographers whose work is quoted, encouraging the viewer to enter into a process of remembrance and identification. From the surrealist play of Man Ray’s Le violin d’Ingres to Duane Michals’ disorientating reflected image of the actress Ludmilla Tscherina, the ten photographs that Brettle has chosen are all representations of femininity that are both alluring and problematic, with a fine line being traced between subversive disruption and objectification of the female body. This foregrounding of the stereotypes around the depiction of women, especially in the depiction of the nude, leads on to an awareness of the orientalist fantasies that are brought up in the Western imagination by images of veiling. The full-length, black niqab worn in these portraits allows only a glimpse of the model’s eyes, in opposition to the exposed bodies shown in many of the source images, presenting a resistant gaze to the viewer that is compounded by the absorbent black fabric that dominates many of the images, a reflective surface that draws the viewer into its depths.

Brettle’s re-presentation of her source material uncannily reverses the colonial desire to unveil the exoticised woman, a desire that has been seen as a metaphor of control and mastery over both the concealed woman and the country occupied. Talking about the series, Brettle explains how it can be seen as a kind of self-portrait, adding that “[t]he ‘veiled’ subject defies/rejects the gaze but by representing the subject through certain iconic images from photography history a subject is suggested, although this is not the subject of the image that we see.” If these images are self-portraits, but the veiled subject is not the artist, then how is the viewer to read the performances taking place in front of the camera?

In a wide-ranging discussion of the veil as a cultural symbol, the editors of Veil: Veiling, Representation and Contemporary Art, 2003, note that veils have been utilised by women in various cultures and periods, from aristocracy in Ancient Greece to contemporary wedding dress. The association of the veiled woman with Islam is only one strand of the iconography of the veil, but one that has dominated Western thinking. Diverse communities are represented by the image of the Muslim woman wearing a burqa or niqab, often pictured as a symbol of Islam’s oppression of women. This conflation of cultural identity under a single image has ironically led to the veiled woman acting as a symbol of resistance to Westernisation, as Frantz Fanon noted in his 1959 essay “Algeria Uncovered”: “To the colonialist offensive against the veil, the colonised opposes the cult of the veil.” This potential resistance is one that resonates with Brettle’s concerns with the politics of the gaze, explored in her other photographic projects. Rather than the exposed, white surfaces of Canova’s sculpted nudes, photographed in Brettle’s series Restoration Work, 2002, the black costume worn in Beyond Black conceals the body, frustrating the viewer’s desire to ‘know’ who he or she is looking at.

In the book The Colonial Harem, Malek Alloula discusses the potential reversal of power enacted by the concealed body of the veiled woman, concluding that “[t]hrust in the presence of a veiled woman, the photographer feels photographed; having himself become an object-to-be-seen, he loses his initiative: he is dispossessed of his own gaze.” This turning around is central to Brettle’s portraits, where the gaze of the camera starts to literally disappear from view when the black costume is presented against a black background. In After Juliet Margaret Cameron, Cameron’s play of light and shadow is re-performed so that now only the edges of the model’s niqab are visible, her downcast eyes evading the viewer in a repetition of the disappearing image as background merges with figure. As a white, non-Muslim feminist, Brettle engages with her own need to try and understand her subject, which is crucially not an individual veiled woman, but the collation of cultural assumptions around the Islamic practice of hijab; which loosely translates as covering or veiling.

The sense of fantasy being presented in this series is heightened by the presence of a number of reflections in the photographs. Here the mirror stands in both for the traditional associations between narcissism and femininity, but also the reflection of the viewer’s projections that are found in these reworked portraits. In viewing the anonymous veiled figure, looking at herself in After Helen Chadwick, and confronting the viewer in After Duane Michals, the viewer is drawn into the image, imagining the feeling of being objectified, made other by the gaze.

Brettle’s choice to re-perform western photographs of femininity brings into focus the ‘whiteness’ of her sources, and the continuing blindness to issues of colour and cultural specificity in some feminist theorising. The series Beyond Black is the first half of a longer work, with this series of portraits acting as an opening, a working through of the significance of the veiled woman from the perspective of a white British feminist, constantly being bombarded with media images of Muslim women as victimised, oppressed, other. For the second half of the project, Brettle is creating a series of photographic and sound portraits with a group of Muslim women in Edinburgh, transitioning from the homogenising, Western fantasies of the veiled woman as passive and anonymous, to the individual experience of British Muslim women who have a varied relationship with the practice of veiling. The two halves will operate almost as a conversation, complicating the binary logic of colonialism and the representation of Muslim women as an undifferentiated community. For now, the soft blackness depicted in fabric that envelops the model and backdrop in many of these images presents a surface that is both reflective, resistant and absorbent, making apparent that the only secrets to be unveiled are the ones brought by the viewer.

Published in Portfolio the Catalogue of Contemporary Photography in Britain: Issue 45 June 2007